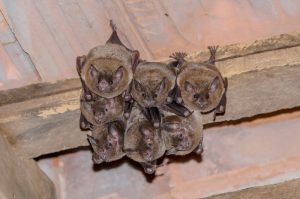 There is a wide gulf between the public perception of bats and their importance to the environment. Though they are often viewed as creepy and dangerous due to their association with vampires and horror movies, they are one of the most necessary creatures for maintaining Florida’s ecosystem. The populations of insects would skyrocket without bats – they eat thousands of mosquitoes and other bugs every night.

For this reason, bats are one of the most heavily protected species in Florida and in other states around the country. The Gray bat and the Indiana bat are two federally protected species found in Florida. In addition to these, the Florida bonneted bat is also a protected endangered species. There are penalties for handling, injuring, moving, selling, and killing these types of bats which can run up to thousands of dollars.

What to Do When a Bat Roosts in Your House

Tricky situations arise when bats decide to make their roost in your attic. You certainly didn’t want them to come in, and you don’t want to deal with the legal consequences of trying to get them out. But, they can’t stay – so what do you do?

It is unwise to attempt a bat removal on your own, because you may accidently hurt or kill the bats. In addition, there are certain times of year during which it is unlawful to perform a bat removal. From April 15 to August 15 is Florida’s bat maternity season, which means that it is illegal to try to get rid of the bats during the summer months. This is because bat mother typically only have 1 pup, and if you remove them before the pup can fly, it will likely die since it totally relies on the mother for food. To try to help the bat population get back to healthy numbers, the state has restricted removals during this time.

Whenever you see bats roosting in your attic, it is best to call Critter Control® of Ft. Lauderdale to perform a bat exclusion. We are fully licensed by the state to handle bats, and our humane methods are sure to keep the endangered animals protected the whole time. Call us today for a free initial consultation at 954-467-6067.